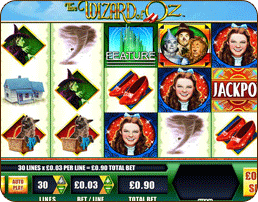 Recognized as one of the best-known movies in the history of films, The Wizard of Oz continues to leave traces of influence across the multimedia. First shown in 1939, the book-turned-film gave birth to a radio play after about a decade. Soon after, The Wizard of Oz reincarnated into an animated cartoon on TV. On the movie’s 35th anniversary, an animated sequel ensued. A year later, a stage show hit the Broadway. From then on, a lot more spin-offs surfaced including the land-based Oz-inspired slot machine. But in the early 2010s, a greater leap of creativity than that broke ground – the online Wizard of Oz slots.

The game is nothing short of the classic motion picture’s feels. It may not be a movie on its own but it is a slot that will accord you a cinematic gaming experience. The slot, however, did some deconstruction. Instead of being faithful to the movie’s fantastic elements, the game takes on its own realistic twists like the inclusion of enormous real-life wins. Also, rather than depicting the story’s villains as stealers of your bankrolls, they are treated as coin-giving symbols all the same. But these are not all that sum up the slot’s prominence. Read on and you will see more.

First off, understand that Wizard of Oz slots game started off as a brick-and-mortar slot title. It used to be just among the machines with spinning reels found in land-based casinos. But it was such a great charmer because of its relatable theme. And that same theme is the exact motif you can expect to lay your eyes on when you play Wizard of Oz slots online.

The interface will set your mood pensive as the game refreshes your memory of the famous Wizard of Oz story. Notice how familiar icons dominate the reels – Dorothy, Ruby Slippers, Toto the dog, the Wicked Witch, and more. All these symbols, when spun, prompt the playing of some magical sound. Just do not get too carried away if that sound transitions into the speaking of some characters when you trigger the features of the game. Also, control yourself if you happen to notice the changing of the screen into either a night time enlivened by the flying Winged Monkeys or a daylight journey into the Emerald City.

What makes the game more indulging is its thrilling gameplay. Play it and you will see it is an adventure in itself. Any spin might turn out to be your chance to journey further into magical lands just within the 5×3 matrix of the slot.

Each spin, though, costs 0.01 to 5 coins per pay line. You can play with one up to 30 pay lines. For instance, if you bet 3 coins on each of the 30 pay lines you activated, then your total bet will be 90 coins. If you chose to play with a lower number of pay lines, your total bet will, of course, be lower as well. These adjustable lines and wide bet range are your variables in winning.

Also, do not forget that the game pays winning combos formed from the leftmost to the right. And if you want these combos to just flash onscreen at random without you clicking the Spin button, then just turn on the Autoplay function. This function allows you to leave the slot spinning on its own for a number of times while you think of ways on how to win Wizard of Oz slots.

Getting Wizard of Oz slots big wins like the 10,000-coin jackpot may happen in just a snap of a finger because of the presence of rewarding game features. Among them is the Wild symbol that substitutes for all symbols except for the feature icons. Surprisingly, this Wild may randomly expand through the entire reel when Glinda the Good Witch appears out of the floating pink bubble.

What is more exciting, though, is the Oz Pick feature triggered by the landing of three Feature icons on reels 1, 3, and 5. Here, you get to pick one of these icons to reveal a cash prize or, if not, any of the two mini-games.

The Winged Monkey mini-game gives you eight Wizard of Oz slots free spins which you can retrigger. Meanwhile, the Road to Emerald City mini-game lets you pick one or more emeralds revealing bonuses. If you happen to pick an emerald showing bonus coins, you will continue clicking emeralds until you click one which reveals the Emerald City or any of the character lands: the Wicked Witch Castle, Scarecrow Corn Field, Tin Man Apple Orchard, and Cowardly Lion Dark Forest. Trigger them and you will know how much more excitement is in store for you.

Behind the greatness of the Wizard of Oz slots casino game is WMS Gaming. This company has been in the industry of casino game-making for over 60 years already. You might trace its history back to the time when online gambling was still a thing of the future. That was particularly the age of slot machines and game cabinets. And as you may know, WMS Gaming was a top-notch technological giant catering to brick-and-mortar casinos all over the US, the UK, and other countries back in those days.

The company, however, never settled to be just a land-based casino game provider. It worked its way into the online gaming world which got bigger as the 21st century progressed. Gladly for the company, online gamblers seemed to have given its games a warm welcome. Among the titles under WMS Gaming liked by bettors are the following:

Add Wizard of Oz slots to this list and you will better see what WMS Gaming’s reputation is made of. Finding these games and more of WMS Gaming’s products is even as easy as A-B-C. More so, you can try them out for free. There are gaming sites offering Wizard of Oz slots free play and demo versions of the company’s other games.

If you think altering the random number generator of the game is the best strategy to win, you are mistaken. The game assures you that no player can rig the system. Read the Wizard of Oz slots Terms and Condition and you will understand better the game’s strong foundation. There are, however, tips you can apply in order for you to have a better chance of controlling your wins, and even losses. Simply put, the Wizard of Oz slots strategy talked about here are some betting techniques and tips on game fund management. Use this strategy and you are sure to have a longer gameplay. As per rule of thumb in slot gaming: The longer you play, the closer you get to achieving the slots return-to-player (RTP) percentage.

WMS Gaming caters to a lot of crypto casinos brands, including Bitcoin casinos that are frequented by cryptocurrency players. This means finding the perfect spot where you can play the game and even other titles shall be simple. While some of the brands are browser-based, some are mobile-supported. Therefore, you can play the Wizard of Oz slots mobile version. You will be happier when you happen to sign up with a casino that gives Wizard of Oz slots no deposit bonuses. These bonuses may be in the form of free spins or free game credits. And yes, claiming these will not require you to deposit any amount. If you wish to deposit play funds, you get a promise of safety and privacy. Read the Wizard of Oz slots Privacy Policy to cast your worries aside.

Even before you play the game, you can get Wizard of Oz slots free bonus deals. These deals usually come as part of the promotional offers of certain casinos. Examples of these are free spins, no-deposit game credits, and match bonuses. Usually, though, claiming these deals requires your membership with the gaming site. Once you are in the game, more bonuses are up for grabs like the in-game bonus coins, Winged Monkey free spins, Road to Emerald City mini-game, expanding Wilds, and more! If you want to get your hands on these, get into the game. Find a casino now that hosts the slot and rewards new players with bonuses. Sign up, claim the perks, play, and experience a one-of-a-kind slot gaming adventure. 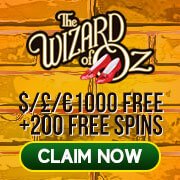